Napajedla Castle, Baroque pearl on the border of the regions, is attractive for its visitors with its non-routine atmosphere. Chalk-stone-made fountain and sprawling castle park with romantic lake make perfect castle scenery. 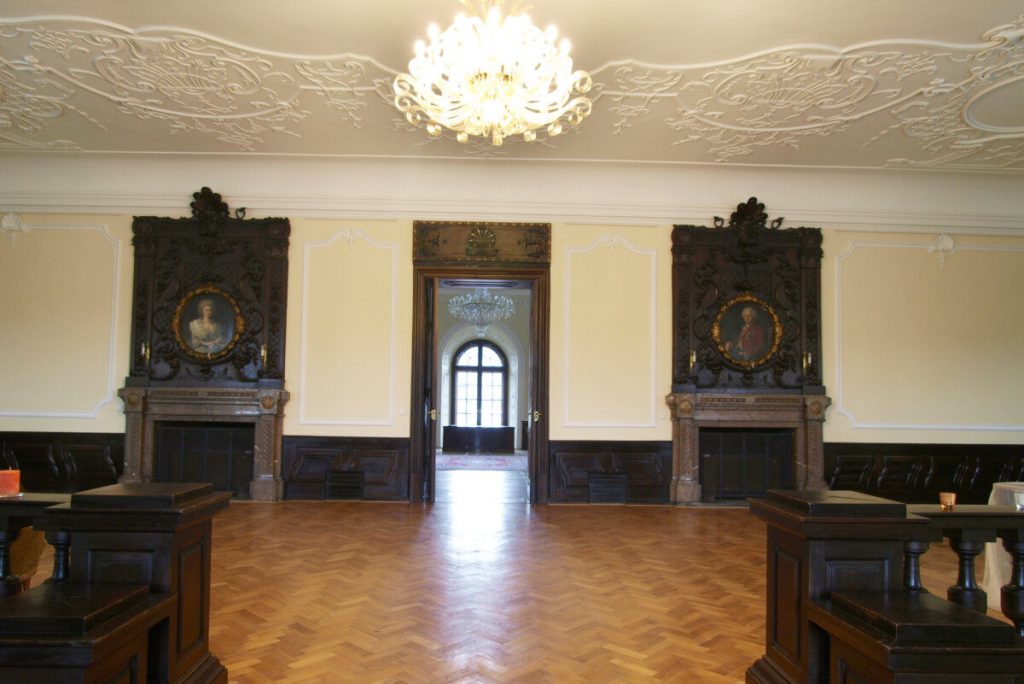 The town of Napajedla, with its population about 8 000 residents is located on the border between Upper and Lower Morava Valleys, on the river Moravi, which makes a row dead arms in this area. The first written mention on the town appeared in 1362. The flourishing of the town was in 16 century, when Napajedla was the property of the aldermen from Zherotyn, (who came from Morava),which was famous for its humanitarian tradition. The expressive centerpiece of the city became “a new castle”, built in 1764-1769. The castle as the aldermen’s residence in style of late Baroque, was built by Zhidlochovitse master Antonin “Mates” Slovachek in conformity with the construction designs by Frantishek Antonin Grimm, the architect from Brno, who accept an order for construction in style of late French Baroque from Anna Mariia from Rottal, who was married to Quidobald from Ditrichstein. F.A. Grimm also made layouts for castles construction in towns of Vistrshitse nearby Gostin and Visovitse. However, the Napajedla building differs from those castles by it aristocratism, grandeur and luxuriously furnished premises. One can say that it is an object of perfection in the development of the cycle “Italian villa” in the Morava region.

Napajedla castle was built in style of late French Baroque. It is an elegant, simple building with two blocks, located as letter “U”, which, apart from its office premises and outhouses, consisted of more than 50 residential rooms on its three floors. The dominant part of the castle is a perfect round mirror hall, which serve, in the first turn, for the castle guests hosting or for holding balls in case of solemn events. Also there is a Dutch masters’ saloon, Baroque saloon, large castle eating-room and other premises of interest. The rooms located on the first (ground) floor, have high ceilings with luxurious patterns.

The entrance with central stairs is located on the eastern side. On the north side there is a terrace with basements. The representative castle building with its favourable location is a pearl of the history of Morava Baroque architecture and some kind contribution to European art trends of the last third of 18 century. One needs to add, that the construction of the castle was being continued also in times of landowner`s successors, descended from Kobenzli, Shtokau and Baltazzi. Especially the last from the stated residence owners had left his mark in the history of Napajedla castle by founding a horse farm, which in 1886 rose English blooded fast horses. The first half of the 20 century, the time of regime of Mrs. Mariia Baltazzi, brought many neo-Baroque changes to the castle’s appearance and up till now the object had preserved almost its unchanged form. Around the castle there is a park, the area of which is 10 hectares. The park is made in English style with large amount of rare trees and romantic pond with water lilies.

Nowadays the castle is the private property and is being renovated step by step. The significance of the object is surely great not only for Zlinskyi territory, but also for the town of Napajedla. The value of the castle is not only in its historical and cultural heritage. It is also a nice place for one’s leisure time, a center of cultural and sport life, a spot of pleasure for social meetings. It is a unique place for holding wedding ceremonies or feasts, family holidays, and also for various corporate events.